Miniatures live at an awkward intersection, a niche within the already niche “tabletop games” market, making miniatures terrain a niche of a niche of a niche. Gamers interested in tabletop terrain tiles typically have three main options:

None of those are really bad options, with each having their own appeal to different sections of the market. Each one has their own advantages and complications—Hirst Arts is time-consuming, but so is painting your unpainted DF terrain pieces, and (to a lesser extent) so is papercraft.

Meanwhile, 3d printing is slowly becoming a reality. It’s a niche that makes the tabletop gamer niche look huge; large segments of the 3d-printing crowd are using them for commercial/industrial needs, and the consumer userbase is still in the “hobbyist” phase, primarily your local makerspace or hacklab crowd. It’s a technology that’s in its initial stages and requires lots of patience and some tweaking of the controls, making it a lot less appealing to the average non-technical consumer who wants an appliance that “just runs” than it does to the kind of person who’s psyched about their latest Arduino or Raspberry Pi project.

We’re still in the early days of 3d printing, where the increase in quality and decrease in price are happening at exponential rates. Remember when laser printers where huge, expensive affairs; say around 1996, where every small office would have their own bulky laser printer tower sitting off in the corner? They were just starting to retail under $10k, with personal printers starting around $500. That’s 3d printing today. A few years ago, a good one would set you back around $9k; today you can snag a solid Ultimaker 2 for $1,500 or $2,500, while the Printrbot Play starts at $399.

We already have a lot of cutting-edge professional uses for 3d printing. We’ve seen 3d-printed prosthetics, clothes, cars, and guitars. Give it another few years, and when the practical/home-use applications of 3d printing are possible in cheap, over-the-counter versions—“hey, I don’t need to leave the house and buy a box of screws when I can just hook my printer up to some metal filament and print one”—boom, they’ll start to compete with laser printers as a sub-$200 device, a throw-in whenever you buy a PC from a big-box store.

So, you’re probably savvy enough to assume there’s some gaming-related connection here, and you’re right: papercraft kings Fat Dragon Games are looking toward the future by introducing their Dragonlock terrain tiles on Kickstarter.

It’s a fascinating idea, really; kind of Hirst Arts 2.0. You buy the “mold” (the digital .stl files) made by professionals, you buy the material (filament spools instead of plaster), and after a long casting process (~4 hours for a basic 2″ x 2″ wall, per FDG) you have a piece of gaming terrain. Repeat as necessary, ad infinitum, for as many pieces as you want. Fat Dragon is starting with ubiquitous dungeon tiles and plans to move into other common themes (castles, villages, etc.) with more Kickstarters in 2016, depending on how this one goes. And given the success so far, with $38k in pledges, it’s safe to say they won’t slow down.

It’s worth noting that FDG’s prices are reasonable, but it’s not the kind of crazy (read: unprofitable) deal that gaming Kickstarters get a reputation for; the base Adventurer pledge of $10 gets you six common pieces (plus a slew of ~25 stretch goals), topping out with the $60 King pledge plus the $15 Traps add-on giving you over 50 pieces (~75 with those stretch rewards). There’s also free “OpenForge” terrain already available online you can download and print yourself, though those pieces aren’t designed collectively like FDG’s designs. So it’s not an entirely brave new world, though it is turning heads as it’s one of the first projects from a well-known company partnering with a dominant digital distributor.

Really, it’s just taking FDG’s already successful business model (“sell terrain you can print yourself”) and applying it to a growing technology widely expected to be commonplace. There’s a reason they want to be first on the market: it’s their same model applied and set up for a future market. 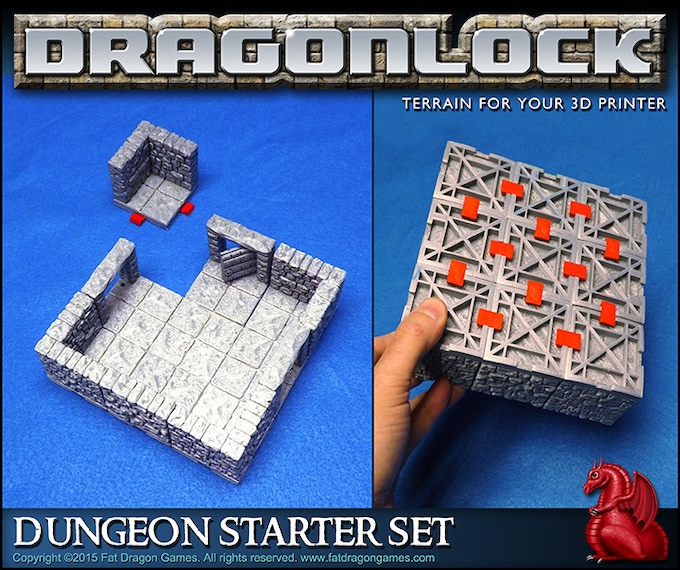 I think you can see where this is going—a new avenue for tabletop gamers. Not all gamers are tech-savvy, not all have the funds to drop on a hobbyist tech device, but it’s a safe bet that 3d printing will become a viable part of the consumer market in the next decade. When that happens, it’ll trigger a lot of changes, including to the gaming sphere—how will Games Workshop or Reaper keep their market share when any 3d designer can model and print their own custom miniatures? It’s not built into anyone’s existing business model… but then again, neither were ebooks, and after the success of RPGNow and Drive-ThruRPG most companies started moving into the digital frontier.

The upside is that when it’s working right, it’s a fire-and-forget process; the downside is that you’re only able to print a few pieces at a time… by my count, one when I leave for work, one when I get home, and one when I go to sleep. Maybe four if I came home for lunch and timed things perfectly, or on days I work from home. And that’s reliant on the process working right every time. 3d printers don’t always run smoothly, and with the required technical self-support it’s not something I’d recommend for the tech illiterate. Using older ABS filament gives out harsh, caustic fumes, though there’s also the biodegradable PLA (made from eco-friendly cornstarch). Today’s early adapters are buying devices that may function in five years, but will be markedly obsolete—not that this stopped anyone from buying laptops or cell phones. Or, well, printers.

I doubt this will replace mold-your-own plaster, papercraft, and premade/pre-painted terrain. Not every gamer even uses miniatures, much less minis terrain; I’ve always been fascinated with the idea of using these kinds of terrain pieces for an epic D&D campaign, but have been hamstrung by first the lack of funds and then the lack of space. (The closest I’ve got has been some of the pieces that Reaper’s done; I’m one of the people who wish they’d run a small Bones kickstarter just for gaming terrain.) It’s not even the first on the scene, as 3d modelers have been designing pieces to print for their own board-, war-, and roleplaying games for years now.

But it’s a trailblazing product choice using a cutting-edge technology, a possible indicator that we’ll see big changes in how physical gaming aids are sold and produced. It’s the kind of development that leaves me intrigued and curious about how the future will pan out. The door has already been cracked open, with amateur models and 3d-printed miniatures; this just opens the door further on a wide world of new possibility.

3 thoughts on “The Future Is Now For RPG Miniatures”