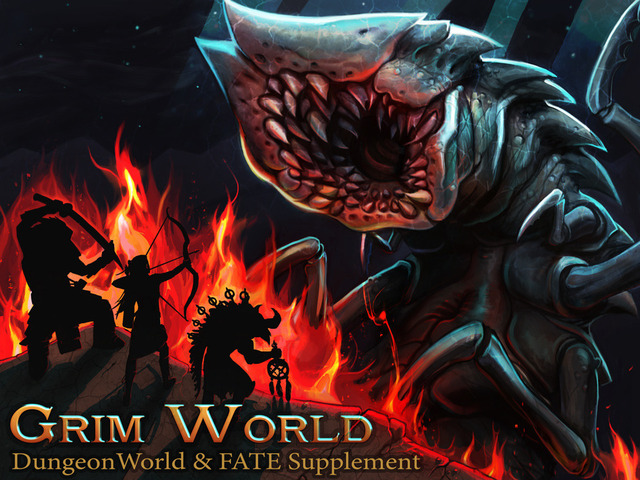 There’s a backlog of RPG products I’ve meant to comment on for some time now; first in was Grim World, a supplement for both Dungeon World and Fate.

While I missed the Kickstarter, I barely got my order in before the post-Kickstarter gateway closed in December, and ended up with my own personalized copy. If you wanted it, the designers would draw a unique Dungeon World move on the inside cover; I got the Zen Skunk. Probably because I was late. (I’m being sarcastic; it’s pretty awesome.)

Grim World is a sourcebook containing material dual-statted for Dungeon World and Fate Core, mainly character classes and ideas designed to evoke a dark fantasy world. It’s more creepy/kooky than pure blood-and-guts, kind of like if Dungeon World had played a lot of Warhammer Fantasy and Dragon Age, but wanted something more epic. Cinematic grittiness, if you will.

What Makes It Awesome?

Let’s start with the design: it’s a full color hardcover, with full-bleed full-page full-color art that is impressive to behold. I’ve seen books from “professional” game companies that don’t look half this good—it’s a thing beauty. The only mild complaint is that the paper is matte instead of high gloss, but given costs that was an understandable choice, and doesn’t change that much.

Anyway, the rules. Grim World is kind of like those 4thcore or OSR games—almost but not to the point of Wicked Fantasy Factory—where the world is brutal and the characters may (will?) eventually die—especially thanks to the new “Death Moves,” in which player death leaves a lasting impact upon the world. (These are very tastefully done: they don’t break the mindset of DW/Fate, and kind of add to the narrative style by making sure death is not ignominious.) It’s a dark and brutal fantasy world, with a lot of inspiration from Lovecraft (e.g., a lot of Lovecraft love in the bestiary chapter). You can tone it down—it’s still Dungeon World, it’s no character-eating Call of Cthulhu or depressing Warhammer or something—but where’s the fun in that?

The meat of the book are the 7 new classes: each have Dungeon World playbooks and Fate Core character building pages. Classes include the tactical genius Battlemaster, spirit binding Shaman, undead-controlling Necromancer, and mobile Skirmisher. The Dungeon World playbooks are slick two-page affairs with new moves customized to the classes; as mentioned, each class gets its own death move that leaves a lasting mark and makes no death in vain. The Fate sections include background ideas and a lot of suggested Aspects and big lists of Stunts to aid in creation. (I kinda love that presentation for Fate; choosing from a predetermined list is a lot more limiting but gives the D&D feeling of character class while still allowing a realm of flexibility.) Also, the death moves make an appearance. Because they are what make Grim World AWESOME.

There’s a lot of supplemental material as well, from the Kickstarter’s stretch goals. The large bestiary includes a ton of new Dungeon World monsters, which is another big draw in my book; these also have some Aspects on the Fate side, as well as the monster’s three peak skills. There’s some artifacts, a bunch of playable races, a really cool GM toolkit to build locations, and even a Dungeon World/Fate hybridization hack. Plus community content, though it’s Dungeon World only. Lots of good stuff in here. 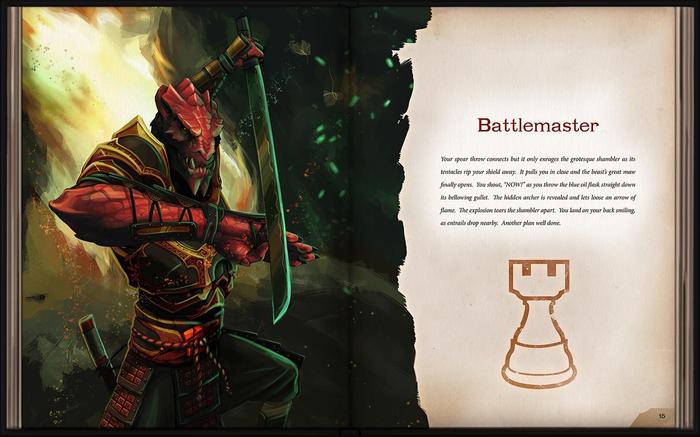 Would I run this?

Hells yeah, kick in the door and start crawling that Dungeon World! I already have tons of ideas for running this. (When I saw the Darkest Dungeons Kickstarter a while back, my first thought was to use Grim World for a pen-and-paper version.) My only problem is finding a local group that’s willing to give Dungeon World a shot, though I feel that is turning around as the *World games gain popularity. More to the point, I think the aesthetic is a bit specific and won’t sell everyone; as much as I love it, not everyone hears “dark fantasy world with death moves” and goes “Huh, that sounds like fun.”

The bigger question is whether to run it in Dungeon World or Fate Core, choosing between my current favorite systems. There’s a lot more content in the book for Dungeon World, so I’d probably go in that direction—to be honest, it gives a lot of monsters, classes, and ideas for the Dungeon World GM, but most of what it’s giving Fate are some sample Stunts/Aspects for specific class ideas, and some vague outlines for monsters and other things. That is my biggest nitpick with it—the Fate content feels a bit slim and tacked-on—but as a fan of both games, the more the merrier. And the writers didn’t just grok the mindset of the two systems, they also came up with an innovative, creative, and balanced product.

If Boldly Games releases any other content for Dungeon World (or Fate for that matter), they have my hard-earned dollars. On time for the Kickstarter this time, I promise.

Grim World can be purchased for $15 as a .pdf, or if you act fast, $40 for print + .pdf. (It’s a hardcover with lush production values; if you’re interested, it’s worth it.) EDIT: if you wanted the dead tree edition, too late, they’re all gone. Check eBay.