A while back, I did a post on entry-/beginner-level roleplaying products, based on my enthusiasm for such things (it kind of got sidetracked though, since I didn’t proof before posting and ended up saying some dumb stuff). I like seeing more entry-level products for the hobby, especially kid-friendly ones, because there aren’t that many out there. So I was surprised and delighted to see the Kickstarter for Strays, a kid-friendly RPG powered by Fate Accelerated. Doubly so, because while I don’t have kids, I do have dogs (both “strays” in that they were rescued from puppy mills), so it’s pretty neat to see a pet-themed RPG. 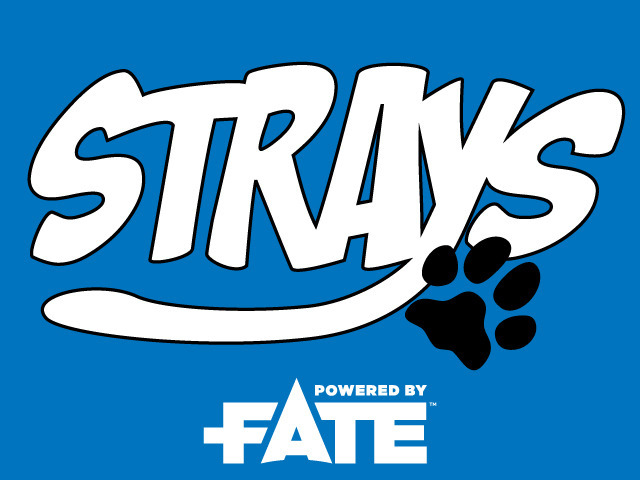 Strays are Santa’s special pals, semi-magical animals who were once pets or friendly neighborhood critters.

When the time came, they went to a big farm in the country, where a nice old couple took care of them, and they had plenty of room to play with other animals just like them.  Dogs had big fields to sniff and scamper though, rabbits laughed and raced their friends, and cats got to climb all the trees they wanted and hide in cool dark shadows.  They were all happy and warm, and they got just a little bit chubby from all the table scraps they got to eat.

Their stories didn’t end there, though.  They were just getting started!

Santa Claus himself — the protector of kids and their dreams — needed their help, after they got better.  Sent deep undercover, far from their old homes, their mission was simple:  live a happy life, love the humans around you, protect the Nice from the Naughty…

…and never, ever, trust a squirrel!

It’s more than a little geared towards kids, as you can see. I think the concept of playing as pets is a great one for that target audience—stat up your dog and take them on miraculous adventures!—and Strays has a lot of heart and charm to back it up. I’m a believer in the concept of getting people into the gaming hobby at any age, and I really dig the idea of playing as animals. FAE is an excellent choice for system as well, since it’s complex yet simple and can let a younger child’s imagination run wild. What a unique and cool game concept.

Strays has already passed its funding, but with less than a week left there’s still a little time to jump onboard. Most of the pledge rewards deal with art—adding your own pet(s) into the game, which is AWESOME. $300 gets your pet iconic character status. Their paw-print dice are pretty snazzy to boot.